When I was a child, our grandparents would travel eight hours to visit us at Christmas time. Nana was a caterer and she would bring a load of sweet treats like her peanut brownies and melting moments so soft they would melt in your mouth. Poppa was a real life Santa Claus – him and Nana would often give presents to Birthright kids. So when we heard they were coming for Christmas we got super excited. Mum tried to get us to clean the house, but we would spend more time looking out the window and trying to be the first kid to see them coming down the road.

I have often thought that God is like that with us. Jesus told the parable of the lost (prodigal) son, which is really about a forgiving father. In Middle Eastern culture it is undignified to run, especially to greet someone who has dishonored the family, yet this father runs to meet his lost son.

Perhaps you are like Sarah who laughed in disbelief when she got the promise of a son in her old age, or like Hannah fervently waiting for a child. Maybe you are like Anna and Simeon waiting to see the promised Messiah. Or Mary or Martha. The lyrics are deliberately ambiguous as to who is singing to who – perhaps God is waiting at the window for you to return to him or to meet with him again. Perhaps he is like the grandparents coming with presents and good things to meet with you.

God
made Man
With us
To dwell

Emanuel
God
With us
Jesus

And you came running
And swept me in your arms

I was recently on stage again in Variety Theatre Ashburton’s Its Only Rock ‘n’ Roll Baby. Featuring over 30 songs, the show had the tagline “The Songs we Sing to, Dance to, Laugh to and Cry to” and it did that with songs grouped into brackets such as The Flirtys, Country Classics, One Hit Wonders, Love Hurts Sometimes, Kiwi Classics and Inspirational. A bracket of songs on domestic violence titled “It’s Not OK EVER” was emotionally powerful and to lighten the mood it followed with the audience singing along to Sweet Caroline and Delilah. I played the role of a reluctant volunteer beside an overly enthusiastic volunteer with cue cards for the songs.

Ashburton Online has more photos of the show on Flickr.

As you can see from the above photos, I played a variety of mostly comedic roles – Loser Sidekick, Disinterested Cue Card Holder, Tough Guy, Zombie, Pretty Girl, Jim and a Balloon Boy in the Just One More bracket. There were several quick costume changes as well as makeup for some complete transformations. Curling my hair took ages was worth it for the laughs when I turned around in Pretty Girl.

The show was enjoyed by all those I talked to and local media published some reviews.

It has been about 30 years since I last performed on stage, so it was great to get back into singing, dancing and acting. As a child I was incredibly shy, but since being involved in theatre I have overcome the fear of performing in public and during this show I was never nervous. I am keen to join the next production – auditions are being held soon for JC Superstar.

Coincidentally just after opening night, a video of the show that first got me started in theatre was shared on YouTube [warning: 2.5 hours of low quality audio and video]. I never saw Woodville Little Theatre’s show Brylcreem live in 1986, but rumour about the show and after-party motivated me to want to join the back stage crew for their next production. With this in mind I went along to rehearsals of Streetcats in 1988 intending to be in the background but I got cast in the show and made my debut on stage.

Since the advent of electronic calendars, I have had very little use for printed calendars. I do not buy them for myself, but I usually get one every year from our property manager and sometimes from a relative so we have 12 New Zealand photographs to look at. Of course, living in the opposite hemisphere, the images are counter to the season, but with global friends I am used to seeing Facebook updates of their summer beach images in my winter or their skiing photos during my summer.

Do you still have printed calendars and change them on time?

If I created a series of 12 images would you buy them in a calendar format? Would you look at them? Would you change them on time?

A few weeks ago, I had the privilege of acting in a movie.

For several years, the Outcasts team has entered the 48 Hours film-making competition. I joined the team and at 7 pm on Friday, we were given our genre (Generation Gap) and elements that needed to be included in the movie (wind, overhead shot, double-take, and audible laughter). We then brainstormed the plot, wrote the script, gathered costumes and props, scouted the locations, set up lights and cameras, filmed. scored, edited with titles and special video effects and delivered the finished movie with 2 minutes to spare on Sunday evening.

The film made it through to the regional finals in Wellington and was nominated for Best Use Of Required Elements – Overhead Shot and Best Original Score/Song.

The whole experience was a lot of fun and I learned a lot about making movies. While those, who were more skilled than I, were finishing the movie, I made a behind the scenes short movie. It contains several in-jokes and almost all of the elements of the competition entry.

Director, Derrick Sims, released a director’s cut of the movie as The Reapers and added it to the Internet Movie Database.

Derrick has directed and appeared in other short films and so I now have a loose connection the Kevin Bacon.

My current Bacon Number is 4!

Theo Heartist was in
The Reapers
with
Derrick Sims
who was in
Making the Film: Come Morning
with
Michael Ray Davis
who was in
Endure
with
Tom Arnold
who was in
We Married Margo
with
Kevin Bacon

As I predicted almost three months ago, a scammy website that is “selling” pirated posters of my work would have a recursive poster of my pirated posters for sale on their site.

Now, the 11th item on the scammer’s list of Theo Heartist posters is “Psst wanna buy a #1 | Theo Heartist”. In future, I expect the above screenshot to appear as another recursive poster of posters for sale.

The scammers capture images from websites and their goal is to phish photographers and artists when they try to take down their copyrighted images. They still have the same number of “happy buyers”, but look how nice this poster of posters of my art will look above your orange sofa.

Please don’t buy from these scammers. I won’t reveal the name or address of the scam website because I doubt that they would actually send you a real poster.

If you do want to buy a print of my art, check out genuine items I have for sale on 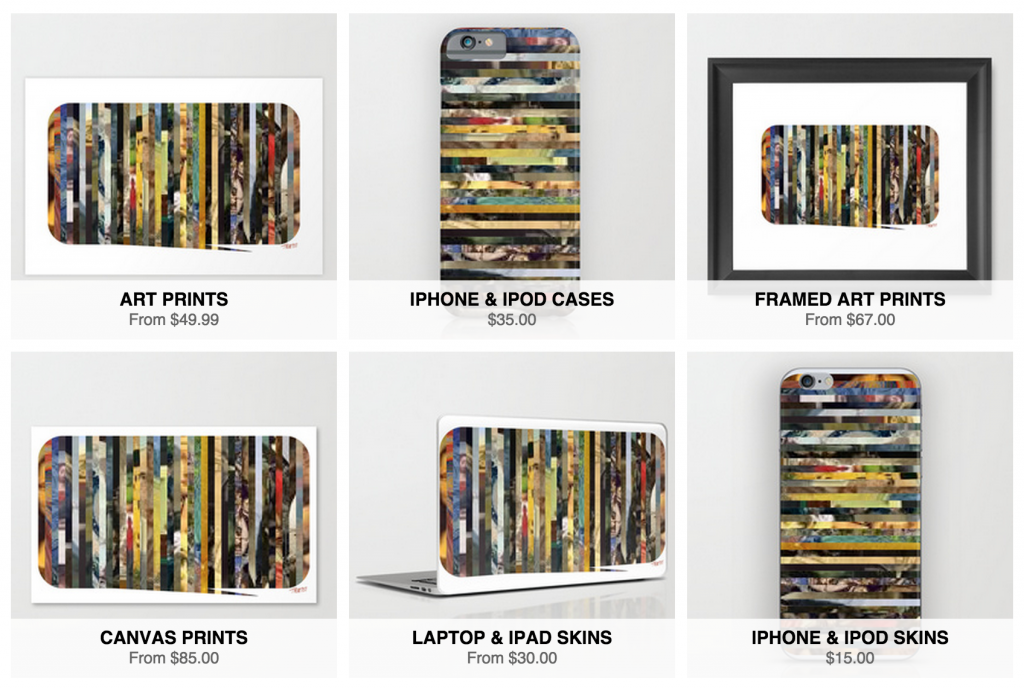 Theo does quite a bit of “Taking The Mickey” in his art.

Here he takes the mickey out of Andy Warhol’s, 1981, Quadrant Mickey Mouse/Myths.

The Collins English Dictionary has these definitions:

take the mickey in British

or take the mickey out of someone

take the mickey in American

The Urban Dictionary has this definition:

Joking, doing something without intent.

Making fun of someone or something.

A less offensive way of saying taking the piss.

My art is worthy of bad thievery

I came across a scammy website that is selling pirated posters of my art for prices lower than their shipping costs. It appears that they capture images from websites and their goal is to phish photographers and artists when they try to take down their copyrighted images. Conveniently they are “Out of stock” of posters of my work. I won’t reveal the name or address of the scam website because I doubt that they would actually send you a poster.

I am posting a screenshot here of the copyright offender’s page and I expect that will reappear there as a recursive poster in the future.

If you do want to buy a print of my art, check out genuine items I have for sale on

If you are procrastinating an art purchase, then buy my e-book How to Profit from Procrastination e-book on iBooks and get future editions for free.

I am in the midst of my 53rd Winter. So far I have experienced 50 Autumns and 48 Springs, but only 47 Summers. How old am I? Why am I procrastinating Summer?

One of the drawbacks of living on the other side of the equator from family and friends is the opposite seasons. With my immediate family in school, our local long Summer break is the only practical time for us to visit our antipodean whanau, who are then in the midst of their Winter.

Unseasonal days experienced during the season have not been counted, only prolonged exposure to the season experienced by the rest of the hemisphere at that time.

Prints of 40 Most Mentioned are now available from our Society6 shop in various formats including framed and canvas prints, stationery cards, and phone/tablet/laptop skins.

Theo is the short form of THEODORE, THEOBALD, and other names that begin with Theo.

Theobald is derived from the Germanic elements theud “people” and bald “bold”.

Heartist is a made up word. The suffix -ist has several meanings:

Hopefully only the first three meanings apply to Theo.

The prefix heart also has many meanings. In Theo’s case heart is courage, kindness and love, the center, the core, the essence, and the source or seat of emotions.